From WildWords
Jump to: navigation, search 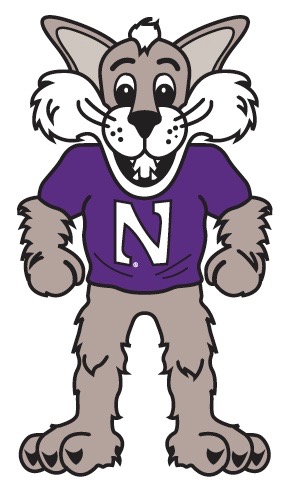 Willie the Wildcat is the official mascot of the Northwestern University Wildcats athletics teams.

Northwestern University's first mascot was a bear cub named "Furpaw," a live, cage bear cub from the Lincoln Park Zoo. [1] In 1923, Furpaw was brought to all playing fields to greet fans before every football game. [2] Yet, after a bad season, the football team decided that Furpaw was bad luck and banished him from returning to campus. [3]

The following year, Wallace Abbey '23, a Chicago Tribune reporter, described Northwestern footballs players as "Wildcats [that] had come back from Evanston" in a game against the University of Chicago Maroons. [4] [5] This is where the name "Wildcats" started. In 1933, the Northwestern Athletic Department along with an advertising firm created the first image of "Willie the Wildcat," the current Northwestern mascot. [6] Willie came to life in 1947, when members of the Alpha Delta Phi fraternity dressed up as Willie the Wildcat in a hand-made costume at the Homecoming parade. [7] The first Willie costume was made up of two people: one wore Willie's front and the other Willie's rear end. [8]

In the early sixties, a Wihelmina Wildcat existed and in the late seventies and early eighties, Winnie the Wildcat was also created. However, these wildcats were shortlived. [9]

Since 1933, Willie the Wildcat has come a long way. Willie has not always been the friendly-looking Wildcat that exists today. Willie started out as fierce wildcat with sharp teeth. [10] The costume has not always been the full-body suit that exists today. The costume was once a "chicken wire with faded purple velvet on top of a football helmet" recalls Robert Forrest '71. [11]

Today, Willie the Wildcat makes an appearance at most Northwestern sports events and often cheers alongside the Northwestern University Marching Band (NUMB). Willie is also involved in community service, campus life and events around Chicago. [12] You may even try out for Willie! Visit the NU Sport website for more information.

Willie the Wildcat is the official, and unique, mascot of Northwestern University. He makes an appearance at most home and some away athletic events to cheer on the 'Cats and pump up the crowd.

The mascot is often referred to as "Willie the Wildcat" or simply "Willie."